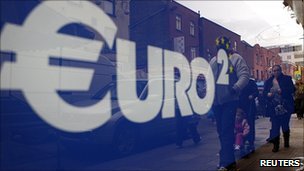 The UK has offered to make a direct bilateral loan to the Irish Republic in addition to contributing to EU and IMF loans, the BBC has learned.

Sources in the government sources say it wants “to help a friend in need”.

Although final figures will not be known for some days, BBC political editor Nick Robinson believes the UK will contribute around £7bn in total.

The Irish prime minister has confirmed that the Republic of Ireland and the EU have agreed a financial rescue package.

The cost of the direct British loan to Ireland is expected to be “in the low billions” and will be in the form of contingency loans which the government expects to see paid back.

Chancellor George Osborne is expected to make a statement in the Commons on Monday.

Sweden has also agreed to make a direct loan to the Irish.

On Tuesday, Mr Osborne said the UK was “ready to support Ireland” in achieving economic stability, if it asked for help.

He said it was in the UK’s national interest that its neighbour had a successful economy.

“Britain stands ready to support Ireland on the steps it needs to take to bring about that stability,” he said following a meeting of European finance ministers.

“When we hear about it in the House, I’m sure many of us will want to know why, how much, how long are we out of the money, what are the prospects of being repaid, what is the interest rate,” he said.

“Of course this will be money we have to borrow ourselves, because we don’t have any money. All the money we’re spending on top of traditional programmes is borrowed.”

Our political editor said Mr Osborne and Prime Minister David Cameron had taken a decision at last week’s G20 summit in Seoul that the UK would be ready to promise £7bn in loans as part of any Irish rescue plan.

Taoiseach Brian Cowen said the amount and terms of the deal would be negotiated in the coming days with the EU and the IMF.

EU Finance Commissioner Olli Rehn, speaking in Brussels, said the loans would be provided to the Irish Republic over a three-year period.

The global financial crisis has dealt the Irish Republic a hard blow.

Once known as the Celtic Tiger for its strong economic growth – helped by low corporate tax rates – a property bubble burst, leaving the country’s banks with huge liabilities and pushing up the cost of borrowing for them and the government.