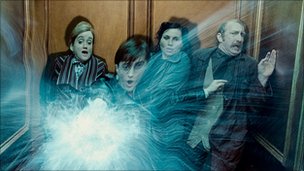 With Sunday estimates of £4.9m it is on course to beat the previous record of £15.3m for a three-day opening, held by the James Bond film Quantum of Solace.

In the US, the latest Harry Potter film took an estimated 125m (£78.2m) on its opening weekend.

It is the best opening weekend in the US for the film series’ history.

In the UK, the previous record for the biggest Friday was held by Quantum of Solace at £4.9m.

The fourth film in the Harry Potter film series, Harry Potter and The Goblet of Fire, held both the previous records for the biggest single day and the biggest Saturday at UK cinemas with £5.7m.

Harry Potter and the Deathly Hallows: Part 1 is the penultimate instalment in the fantasy film franchise.

The books’ creator JK Rowling said David Yates’ film – the seventh in the series – was her favourite so far.