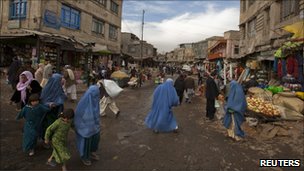 Children may be safer growing up in Kabul than they are in London, Glasgow or New York, a Nato official has said.

Mark Sedwill said the Afghan capital, as a “city of villages”, was better for youngsters than many Western cities, despite dangers posed by the conflict.

The senior civilian representative told CBBC’s Newsround: “Most children can go about their lives in safety.”

But some Kabul youngsters spoke of their fears, and Save the Children said the claim was “wrong and misleading”.

A spokesman for Glasgow City Council also said Mr Sedwill was “wrong” to include the city in his comments.

Kabul has borne the brunt of the war in Afghanistan and although the security situation there has improved of late, it is still deemed a dangerous place to live.

Justin Forsyth Save the Children

The UK Foreign and Commonwealth Office website advises against all but essential travel to parts of Afghanistan, and that nobody visits the areas worst-hit by fighting.

Several young people interviewed by Sonali Shah, a presenter for BBC children’s channel CBBC, spoke of their fear of the violence.

Sohrad, a 16-year-old student, told Newsround: “Because of explosions happening in the city, it is frightening when we come to school. We are afraid of explosions in the school.”

And Manija, 11, also from Kabul, described the reality of growing up in a country at war. She said: “When there are explosions I get sad because people are dying, but the next day when they are living a normal life and celebrating I get happy.”

However Mr Sedwill told the programme: “In Kabul and the other big cities actually there are very few of these bombs. The children are probably safer here than they would be in London, New York or Glasgow or many other cities.

“It’s a very family-orientated society. So it is a little bit like a city of villages.”

But chief executive of Save the Children, Justin Forsyth, said it was wrong to make the comparison with children living in Western cities.

“Afghanistan is the worst place on earth to be born a child – one in four children living there will die before they reach the age of five,” he said.

“We should be listening to what children in Afghanistan are saying. Last year was the deadliest for children since late 2001, with more than a thousand killed because of the conflict.

“But it’s not just about the bombs. A staggering 850 children die every day, many from easily preventable diseases such as diarrhoea or pneumonia, or because they are malnourished.

“The lives of children in Afghanistan are in extreme danger. The international community needs to put as much time, effort and money into stopping children dying unnecessarily as into security operations there.”

A spokesman for Glasgow City Council said it understood it was important to reassure children in Afghanistan about their safety, but added that Mr Sedwill “has got it wrong here”.

“This comparison will simply lead people in Glasgow, London and New York to pull out the statistics showing how very wrong he is and his, very important, message to the people of Afghanistan will be lost,” he said.

When asked why Nato troops had not won the war against the Taliban in Afghanistan, Mr Sedwill said: “It’s not like the Second World War, or other wars that people are familiar with, where you fight on the battlefield.

Leaders of Nato’s 28 states have backed a strategy to transfer leadership for the fight against the Taliban to Afghan forces by the end of 2014.

Growing Up In A War Zone: A Newsround Special will be broadcast on CBBC at 1815 GMT on Monday 22 November