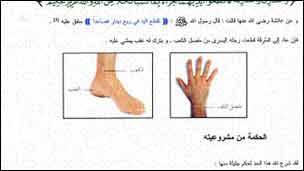 The government says it will not tolerate anti-Semitic and homophobic lessons being taught to Muslim children in the UK.

BBC Panorama found that more than 40 Saudi Students’ Schools and Clubs are teaching the official Saudi national curriculum to about 5,000 pupils.

One text book shows how the hands and feet of thieves are chopped off.

The Saudi government said it had no official ties to the part-time schools and clubs and did not endorse them.

However, a building in west London where Panorama obtained one of the text books is owned by the Saudi government.

The director of education for the Saudi Students’ Schools and Clubs said the Saudi Cultural Bureau, which is part of the embassy, had authority over the network.

Education Secretary Michael Gove said there was no place for the Saudi teachings with regard to Jews or homosexuals in Britain: “To my mind it doesn’t seem to me that this is the sort of material that should be used in English schools.”

“To present it cold as it seems to be here just part of the teaching of Islam, no it’s not wise”

He said in light of the BBC’s findings, the school inspectorate Ofsted was looking into the possible regulation and inspection of out-of-hours schools and clubs. At present, part-time schools do not fall within Ofsted’s mandate.

“Ofsted are doing some work in this area, they’ll be reporting to me shortly about how we can ensure that part-time provision is better registered and better inspected in the future,” Mr Gove said.

One of the text books asks children to list the “reprehensible” qualities of Jewish people. A text for younger children asks what happens to someone who dies who is not a believer in Islam – the answer given in the text book is “hellfire”.

Another text describes the punishment for gay sex as death and states a difference of opinion about whether it should be carried out by stoning, burning with fire or throwing the person over a cliff.

In a book for 14-year-olds, Sharia law and its punishment for theft are explained, including detailed diagrams about how hands and feet of thieves are amputated.

In a written response, the Saudi embassy said such materials were often taken out of context and often referred to historical descriptions.

But Neal Robinson, an expert in the Koran, said the context in which the materials are presented comes with risks.

“To present it cold, as it seems to be here, just part of the teaching of Islam, no it’s not wise. In the wrong hands I think it is… ammunition for anti-Semitism.”

The use of these materials in Britain comes three years after a BBC investigation found a Saudi-funded school in west London was using texts that referred to Jewish people and Christians in derogatory terms. That prompted assurances at the highest diplomatic levels that the materials would be removed.

Panorama has also found evidence of extreme views on some private, full-time Muslim school websites, including messages that state: “Our children are exposed to a culture that is in opposition to almost everything Islam stands for” and “We need to defend our children from the forces of evil”.

Dr Usama Hasan, an Islamic scholar and part-time imam in east London, warned of the dangers of segregating young Muslims in Britain, particularly the seminaries where the next generation of imams are being educated.

“They don’t interact with people who are not Muslim… they don’t learn the ingredients of the western world, so it’s very easy for them to read the medieval texts which were written at a time when Islam was under attack and say non-believers are our enemies and we have to fight them.”

Panorama: British Schools, Islamic Rules, BBC One, Monday, 22 November at 2030GMT then available in the UK on the BBC iPlayer.