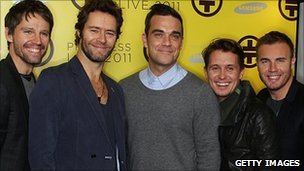 The Official Charts Company said it sold almost 520,000 albums – more than the rest of the top 10 put together.

It is the band’s first album since reuniting with Robbie Williams.

Progress is the group’s fifth number one studio album out of the six they have released.

Their 2006 reunion album, Beautiful World, sold 2.5 million copies in the UK and clung to the number one spot for eight weeks.

Progress was one of five new albums to enter the top 10 this week, with Rihanna’s Loud coming in at number two. 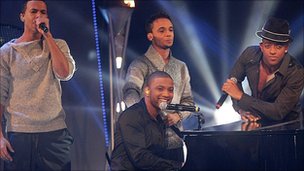 Susan Boyle fell two places to three with The Gift, while violinist Andre Rieu’s Moonlight Serenade – an album of waltz tunes – entered the chart at four.

Greatest Hit’s So Far by Pink came in just behind at five and Bruce Springsteen’s latest album, The Promise, entered at seven.

Meanwhile, in the singles chart, X Factor runners-up JLS went straight in at number one with their Children In Need charity single, Love You More.

Take That remained at two with The Flood while Ellie Goulding’s version of Elton John’s Your Song leapt up the chart 36 places from 39 to three. The song is currently being used in a television advert campaign for a department store.

Last week’s number one Rihanna fell three places to four with Only Girl and Katy Perry rounded out the top five with Firework.

The only other new entry in the top 10 was Westlife with Safe coming in at 10.

And after Beatles back catalogue was finally made available via iTunes after years of negotiations, Hey Jude made a re-appearance on the chart, just enterting at number 40.