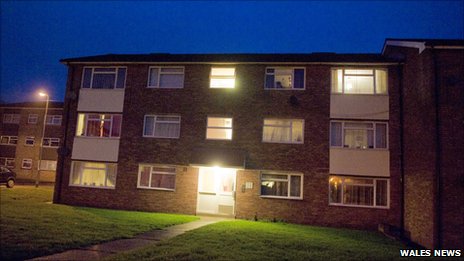 Police investigating the death of an 11 month-old baby girl in Abergavenny say she died from multiple stab wounds.

Police called to a flat at St David’s Road early on Saturday carried out heart massage on the girl but she was later pronounced dead by paramedics.

A spokesoerson said she is being detained under the provisions of the Mental Health Act and is undergoing medical assessment.

Officers were called to the flat at approximately 0530 GMT on Saturday and carried out the heart massage, but the baby was pronounced dead at the scene.

A post mortem examination has established that the baby died from multiple stab wounds.

Detectives have described the death as a “tragic” and “domestic incident”.

“This is an extremely distressing incident”

They have said they are not looking for anyone else in connection with the death.

Inquiries are continuing in the area and forensic examiners are still at the scene.

Det Ch Insp Jon Williams, who is leading the investigation, said: “I have a team of approximately 25 detectives and staff working on the case.”

“This is an extremely distressing incident. I would reiterate that we are not looking for anyone else in connection with the death at this time and there is no risk to the wider community.

“However, I would urge anyone with information about this incident to contact police – it could be crucial in assisting us with this investigation.”