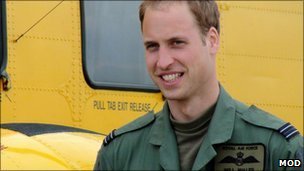 Prince William carried out a dramatic helicopter rescue just 48 hours after announcing he is to marry Kate Middleton next year, it has emerged.

The prince, 28, helped a walker who had collapsed on Snowdon in north Wales with chest pains in stormy weather.

The search and rescue pilot, who is based at RAF Valley in North Wales, was called into action at 13.30 GMT on Thursday.

The royal engagement was announced by Clarence House on Tuesday.

The rescue saw an RAF Sea King with a four-man crew on board scrambled to help Greg Watkins who was stuck 3,000ft (914m) up Wales’ highest peak.

Mr Watkins had to be winched onto the helicopter and was flown to hospital in Bangor.

It is thought he suffered a heart attack and he has since undergone an operation.

Speaking to the Sunday Mirror, Mr Watkins, a gym worker of Ebbw Vale, Blaenau Gwent, said the prince’s actions and those of his crew had saved his life.

“I didn’t know Prince William was flying the helicopter until we landed at the hospital. Even then, I felt too unwell for it to register much”

“If it wasn’t for him and the rest of his crew, I’d be dead.

“Hearing his helicopter getting nearer and nearer was the best sound I’ve ever heard. He and his crew saved my life.

“I didn’t know Prince William was flying the helicopter until we landed at the hospital. Even then, I felt too unwell for it to register much.

“The winchman helped me out and on to a stretcher and whispered ‘Prince William’s just flown you here’. I looked up at him and just said ‘Oh. Tell him thank you’.

Prince William was called out on the rescue mission within five hours of returning to RAF Valley after announcing his engagement to his long-term girlfriend.

For the last six months, William and Kate have been renting a cottage on Anglesey, close to the RAF base.

A Ministry of Defence spokesman said: “Flt Lt Wales was called out, as part of a four-man RAF search and rescue crew, to assist a man suffering from chest pains on Snowdon.

“The man was subsequently flown to a local hospital for treatment.”

In October, during his first shift on duty after qualifying, the prince helped in the rescue of a 52-year-old man taken seriously ill on a gas rig in Morecambe Bay.