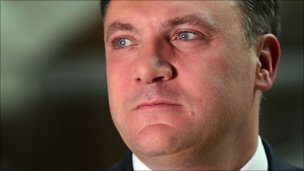 Shadow home secretary Ed Balls has said Labour may be ready to back coalition moves to cut the pre-charge detention period for terror suspects to 14 days.

In a major policy shift, he said he could support changes if they did not impede police and security services.

Mr Balls told the Sunday Telegraph Labour’s reputation had suffered from its attempts in government to raise detention times to 90 and then 42 days.

The coalition has also said it wants to review control orders.

Home Secretary Theresa May announced a review of counter-terror legislation in June, when she said her personal view was that the limit should be 14 days, which the Liberal Democrats also support.

The review, overseen by former director of public prosecutions and Lib Dem peer Lord Macdonald of River Glaven, is still under way.

It is also considering the issue of control orders – introduced under 2005 anti-terrorism legislation – which Mr Balls said he was also prepared to see scrapped if there was a workable alternative.

Ministers sign an order to place a terrorism suspect under close supervision that some say is similar to house arrest.

The government said at the time that it still needed a mechanism which would allow it to control the lives of some suspects whom it said it could not prosecute because of the rules over the use of secret intelligence in trials.

In 2005, under prime minister Tony Blair, Labour tried to raise the time terror suspects could be held without charge to 90 days – resulting in Mr Blair’s first Commons defeat as PM.

MPs later voted to extend the period from the then limit of 14 days to 28 days.

There was a further attempt to raise it to 42 days under Gordon Brown, in 2008, but the plan was heavily defeated in the House of Lords, and then abandoned.

Mr Balls admitted in the Sunday Telegraph interview that those attempts got the balance wrong between protecting the UK from the risks of terrorist attacks, and preserving democratic freedoms.

Mr Balls told the paper: “Even 42 days was a step too far. Our reputation as a party which protected liberty as well as security suffered as a result.

“Our approach should always be that if the evidence shows we can go down from 28 days without impeding the police and security services from doing their jobs, then we ought to do it.”

On control orders he said: “They are such exceptional measures that in an ideal world of course we would want to manage without them,” he said.

On both issues Mr Balls’ final stance will depend on the evidence of the police and the security services to the government’s review, he said.

He made clear his intention to move away from what was seen by some critics as an authoritarian approach under Mr Blair and Mr Brown.

“In government, I’ve no doubt that my Labour colleagues did their best on every occasion to get that balance right in the face of the real and dangerous threats against the country, but did we always succeed? Probably not.”

This change of heart is likely to go down well among Labour’s supporters – many of whom regarded the detention time limits as draconian, said BBC political correspondent, Gary O’Donoghue.

Director Alex Deane said: “This is good news. It means that there is simply no excuse for the government to keep the limit at 28 days – even the authoritarian Labour Party which introduced 28 detention now agrees that it’s wrong.”