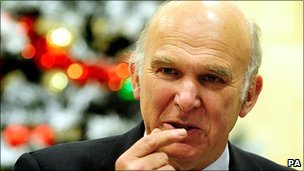 Business Secretary Vince Cable has denied breaking promises on university fees, insisting the Lib Dems’ pledge to oppose any rise was not binding.

Signing such a pledge on fees before the election might have been the wrong “political judgment”, he acknowledged.

But Mr Cable told BBC1’s Politics Show coalition plans to lift the ceiling on tuition fees to £9,000 did not indicate his party was untrustworthy.

Thousands of people took to the streets of London for a demonstration earlier this month, which flared into violence when a 2,000-strong section of the march broke off to confront police and attack the Conservative party headquarters.

The National Union of Students has also vowed to “chase down” any Liberal Democrat MPs who vote in favour of allowing universities in England and Wales to increase fees from the current cap of £3,290.

Many had publicly signed a pre-election pledge to vote against any such rise, should they be elected in May.

But Mr Cable insisted his party had not betrayed anybody and that the coalition agreement struck with the Tories was their only binding commitment.

“We didn’t break a promise. We made a commitment in our manifesto, we didn’t win the election. We then entered into a coalition agreement, and it’s the coalition agreement that is binding upon us and which I’m trying to honour,” he said.

Asked whether it would have been better if he had not signed the pledge, he added: “From the point of view of political judgment it may well have been, but it’s not an issue of trust.

“We and the Conservatives separately made a whole series of commitments in our manifesto and outside it.

“We haven’t been able to carry all of them through, partly because we have a coalition and have had to make compromises and partly because we’re still in the middle of this appalling financial situation.”

Deputy Prime Minister Nick Clegg was bombarded with parliamentary questions on the subject earlier this month.

Labour’s deputy leader Harriet Harman quoted him as having previously said that increasing tuition fees to £7,000 a year would be “a disaster” and described the new stance as “shameful”.

Mr Clegg, the Lib Dem leader, insisted the coalition’s policy – due to take effect from 2012 – was fair and that graduates who earned the least would pay less than currently. 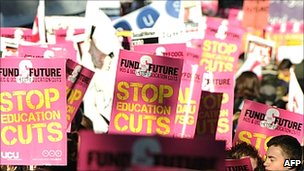 Thousands of people have protested against the fee hike

However, he has admitted that he “should have been more careful” about signing the pledge in common with other Lib Dem MPs.

Amid expectations of further protests on Wednesday, Mr Cable told the BBC that many of those involved did not grasp what the government was proposing.

“It doesn’t actually affect them – we’re talking about a system of graduate contribution that will only affect people who start going to university in a couple of year’s time,” he said.

“If they are concerned for the next generation what I think they do need to understand is that we’re making the system significantly fairer, making it much more attractive for part-time students and for graduates on low incomes.”

To watch the Vince Cable interview and catch up with the week’s events at Westminster, see the Politics Show on BBC1 at 1200-1305 GMT.