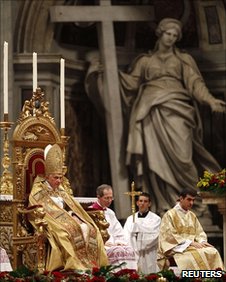 Pope Benedict XVI is reported to have said the use of condoms is acceptable “in certain cases”.

In a book due to be published on Tuesday, he said they could reduce the risk of infection with HIV, such as for a prostitute.

The pontiff is reported to have made the comments in an interview with a German journalist. The Vatican newspaper ran excerpts on Saturday.

When asked whether the Catholic Church is “fundamentally against the use of condoms”, he is said to have replied, in the book entitled Light of the World: The Pope, the Church and the Signs of the Times:

“It of course does not see it as a real and moral solution.

“In certain cases, where the intention is to reduce the risk of infection, it can nevertheless be a first step on the way to another, more humane sexuality,” he said.

The Pope spoke to German author Peter Seewald in a series of long interviews last summer.

If the comments were accurately reproduced, this would provide a significant departure from the Vatican’s traditional hardline approach to the use of condoms, says the BBC’s Duncan Kennedy in Rome.

Until now, the Vatican had banned the use of any form of contraception – other than abstinence – even to prevent sexually transmitted diseases.

This has led to the Vatican being heavily criticised for its position in the context of the Aids crisis.

On a visit to Cameroon last year, the Pope said the use of condoms could endanger public health and increase the problem of HIV/Aids, rather than help to contain the virus. This drew criticism from several EU states.

Campaigners say condoms are one of the few methods proven to stop the spread of HIV.