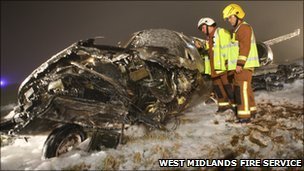 Thousands of people have continued to be affected as flights were suspended at Birmingham Airport after a plane carrying a transplant liver crashed.

The plane, from Belfast, hit the airport’s landing system antennae.

Two men were injured, one critically, but the nearby Queen Elizabeth Hospital said the liver transplant operation went ahead successfully on Friday.

The airport reopened shortly after 1200 GMT but dozens of flights were still affected.

About 45 flights were thought to have been affected on Saturday.

The airport’s chief executive, Paul Kehoe, said about 4,000 to 5,000 passengers had been affected so far on Saturday.

However, he said the airport building had remained open for check-in.

Mr Kehoe had advised people to check with their airline and added they could not necessarily speak to anybody at the airport as “the volume of calls has been so great”.

The airport said the Air Accidents Investigation Branch (AAIB) had finished its investigation there and the site had been handed back. The debris was being cleared at the site.

The pilot of the Cessna, a 58-year-old man, was trapped in the wreckage after the crash, suffering from multiple injuries, and was airlifted to hospital, while the other casualty was less seriously hurt.

The organ was safely delivered to the hospital by a police motorbike following the crash involving the private jet, which happened when it came in to land at 1535 GMT on Friday.

The transplant liver was on board a Cessna that crash-landed on the tarmac in foggy conditions.

The donor organ was retrieved from the burning wreckage of the light aircraft and taken to Birmingham’s Queen Elizabeth Hospital.

A spokeswoman for the hospital said the transplant had been carried out “successfully”.

She added: “The recipient is stable, as would be expected at this time.”

She said the operation was the sixth liver transplant in five days at the hospital.

The spokeswoman added: “The transplant team would like to thank the pilot of the light aircraft and his colleague for their bravery. Our thoughts are with the individuals and their families.

“The team would also like to thank the quick-thinking of the fire and rescue teams at the scene who saved the organ.” 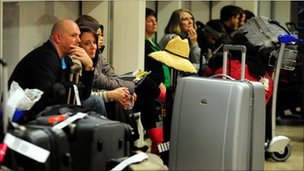 It emerged that a pilot from the Warwickshire and Northamptonshire Air Ambulance (WNAA) approached the remains of the burning Cessna to cut its fuel supply after the crash.

An air ambulance spokesman said the foggy conditions on Friday afternoon had made the rescue mission extremely difficult.

The spokesman described the air ambulance pilot on the scene as “brave”.

He said: “[He used] his aviation and technical knowledge to locate and cut the fuel supply to the engine and make the patient more accessible to the fire service”

A West Midlands Ambulance Service spokeswoman confirmed one man was seriously injured in the crash and was airlifted to University Hospital of Coventry and Warwickshire for further assessment and treatment.

She said a second man, believed to be in his 30s, was treated at the scene for flash burns to his body and a back injury and was taken to Heartlands Hospital in Birmingham.