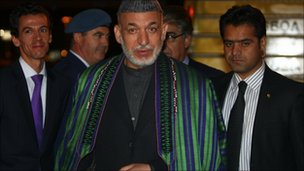 Afghan President Hamid Karzai is preparing to meet Nato leaders in Lisbon for talks on withdrawing troops from his country by the end of 2014.

A spokesman for Mr Karzai said he and Nato shared the “same strategic interests” but that there were many issues still to be worked out.

Russian President Dmitry Medvedev is also due to address the summit.

The Portugal summit also backed the swift ratification of the Start treaty between the US and Russia, aimed at cutting the nuclear weapon stockpiles of both sides.

Nato’s International Security Assistance Force (Isaf) has some 130,000 soldiers based in Afghanistan, most of them from the US.

US President Barack Obama said the Isaf mission was “moving to a new phase”, and that the target for handing over the overall responsibility for security to the Afghans was still 2014.

Some Nato members have expressed concerns that Afghanistan may not be ready to manage its own security by that time, but Secretary General Anders Fogh Rasmussen has said the goal is “realistic”.

Mr Rasmussen said there would still be a role for Isaf troops in the country in 2015 and onwards, but that would largely be in training Afghan forces.

Mr Karzai’s spokesman and advisor, Ashraf Ghani, said Nato and Kabul had “the same strategic objectives” for the withdrawal – they now needed “to work out a lot of implementation issues” and set milestones for the intervening years.

The missile defence plan is directed against the potential threat from the 30 or so countries that have or are developing weapons capable of reaching Nato soil.

In Washington’s view the primary threat comes from Iran. But you will not find any mention of Tehran’s missiles in Nato’s new plan.

Turkey – which may well be host to a crucial X-Band radar station – insisted it would not back the plan if there was any explicit mention of Iran.

This is only a pointer to some of the many problems that may lie ahead; issues of command and control, data exchange and cost.

Bringing Russia on board too will not be easy; Russia has so far rejected past US invitations, fearful that its own missile force might be compromised.

Any deal with Moscow is likely to involve coordination between separate Nato and Russian systems rather than the full integration of Russia’s air defences in the Nato scheme.

“A journey that has a clear sense of destination is a much easier journey than a journey into the unknown,” the Associated press quoted him as saying.

“We have now agreed on the destination, this becomes the question of aligning ends and means, together determining the pace and bringing about a common understanding of strategy.”

The two-day Lisbon summit has been billed as one of the most important in the alliance’s history as it seeks to update its strategy and structure to face new security threats.

On day one, the member states reached an agreement to develop and deploy defences against ballistic missile attack on its territories.

Mr Obama said the agreement “responds to the threats of our times” and shows Nato’s “determination to protect our citizens”.

Nato hopes Russia will also agree to join the project, and will speak about the issue with Mr Medvedev on Saturday.

But the BBC’s diplomatic correspondent Jonathan Marcus says that bringing Russia on board will not be easy – Moscow has rejected all previous invitations over fears its own missile force might be compromised.