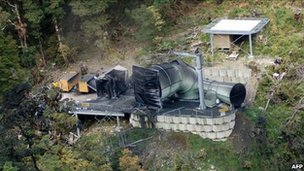 Three of the 29 men missing following an explosion in a mine in New Zealand are British, journalists at the scene have been told.

A union representative said he believed one man was Scottish, while the other two were from Yorkshire.

The families of all the trapped men are reported to have been notified.

The police chief heading the mission to rescue the men – with whom there has been no contact – has vowed to “bring them home”.

Trevor Bolderson, of the Engineering Printing and Manufacturing Union, said he believed the men from Yorkshire had been working at the mine for about 12 months, while the Scottish man had been there “for a bit longer”.

The missing workers range in age from a 17-year-old – believed to be on his first shift – to a 62-year-old.

The explosion at the Pike River mine, on New Zealand’s South Island, happened at around 1530 local time (0230 GMT) on Friday.

Superintendent Gary Knowles said they had to ensure the site was safe before sending rescue teams below ground.

Officials said there were 29 miners unaccounted for, two more than previously thought.

Earlier, two workers walked out of the mine with moderate injuries.

“Our primary focus over the next 24 hours is to to hopefully locate the miners and bring them home safely,” Mr Knowles said at a news conference.

Concerns about the possibility of another explosion have delayed the search effort, officials say.

There were also fears that ventilation in the mine may have been compromised due to an earlier power outage, hindering attempts to pump fresh air in, said Ms Dunn.

Each miner carried 30 minutes of oxygen, enough to reach oxygen stores in the mine that would allow them to survive for several days, officials from Pike River Coal, the mine operators, said.

The mine, which employs some 150 people, has been operational since 2008 and runs deep under the Paparoa Ranges on the rugged western coast of the South Island.

Of the 29 men, 16 are local employees, while 13 are contractors. Two are thought to be Australian.

An electrician went into the mine at 1550 to investigate a power failure, and 1,500m (4,920ft) into the shaft he discovered the driver of a loader who had been blown off his machine. He then raised the alarm.

Mining experts said it could have been an explosion of methane gas, coal dust, or a combination of the two.