With the iEA15BLK from iLuv, you can control your iPod and iPhone no matter what headphones you are using. This in-line remote lets you adjust the volume, play, pause, or change the track. You can even hold the center button to use the “Voice Over” feature for your iPod shuffle 3G, and a voice will identify which track or playlist is currently playing.

Got a pair of headphones you already love, but wish you had iPod controls? Rather than buying new phones, this in-line remote lets you add music control for Apple devices.

Works With Any Standard Headphones
iPod users can attach the iEA15 remote adapter to any pair of headphones with a standard 3.5mm plug, without sacrificing sound quality.

Control Your Music
Just like the Apple headphones included with most iPods, these will let you control volume, play/pause, next track, and previous track. Equipped with a remote chip provided by Apple, it’ll work with most iPod models.

Works With Mac Computers
Mac’s computers also allow you to use headphone remotes. This device is compatible with the following models:

The iEA15 also lets you control iTunes on your iPad.

VoiceOver
The iEA15 also supports the VoiceOver feature on the iPod shuffle 3rd generation (the 4th generation model has a dedicated button). Press and hold the center button to hear the title and artist playing or to switch playlists. 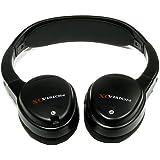 The XO Vision wireless IR Headphones feature extra padding for superior comfort, a volume knob, auto shutoff and a unique foldable earcup design. Extra foam cushioning gives you superior comfort making them ideal to wear over long periods. Auto Shut-Off saves your battery by automatically shutting down when not in use. One size fits all – easily adjusts to fit any size head. Touch On/Off Switch and Volume Control conveniently located on side of headphone. Batteries Included. Simply turn the head