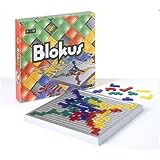 Blokus develops logic and spatial perception while kids learn to be tactical. Players take turns placing pieces on their board, each starting from their corner. Each new piece must touch at least one other piece of the same color, but only at the corners. The goal is to get rid of all your pieces. The game ends when all players are blocked from laying down any more of their pieces. Includes one game board with 400 squares, 84 game pieces in four bright translucent colors, and an instruction guid

Avatar X360In a distant corner of the universe, a devastating conflict is about to erupt between two very different worlds. On the planet of Pandora reside an indigenous people known as the Na’vi. When the Na’vi find themselves engaged in a struggle with the RDA Corporation, a space-faring consortium in search of valuable resources, it sets the stage for a conflict unlike any the universe has seen before. Step into a dazzling world from the imagination of James Cameron and take your stand in the