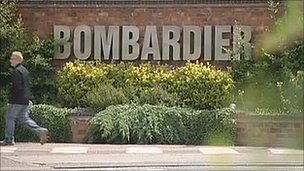 Train-maker Bombardier, which recently missed out on the £1.4bn Thameslink contract, is expected to announce job losses on Tuesday.

Last month, the Derby firm lost out to Siemens, which was named preferred bidder to build 1,200 carriages for the route between Bedford and Brighton.

Unions described the news as a “hammer blow” for British manufacturing.

Bombardier, which employs 3,000 people in the city, subsequently announced a full review of its UK operations.

Securing the Thameslink contract was regarded as crucial for Derby’s Litchurch Lane plant – the UK’s last rolling stock manufacturer – as most of its current orders will soon be completed.

Speaking on Friday, the leader of Derby City Council, Philip Hickson, said he expected the “full scale of the disaster” to be revealed this week.

After losing out on the contract, Bombardier said it was working with unions and would keep employees informed, while the union Unite has pledged to put pressure on the firm and the government to keep the factory open.

Mark Young, co-ordinating officer of Unite, said: “The country that invented the railways is at risk of losing its ability to manufacture trains unless the government urgently rethinks its decision to award preferred bidder status to Siemens instead of Bombardier.

“The government can reverse this decision and get UK train manufacturing back on track.

“It is simply unsustainable for the government to claim to support UK manufacturing with one hand and then with the other hand take decisions which potentially wipe out an entire manufacturing sector.”