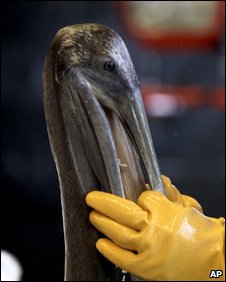 US Homeland Security Secretary Janet Napolitano is due to testify on the federal government’s response to the oil spill in the Gulf of Mexico.

BP’s Lamar McKay will also appear before the Senate Committee on Homeland Security and Governmental Affairs.

Oil has been spewing into the Gulf since BP’s Deepwater Horizon rig exploded on 20 April.

US President Barack Obama has described it as a "potentially unprecedented" environmental disaster.

Senator Joseph Lieberman, chair of the committee, said it had "lots of questions" to ask Ms Napolitano and Mr McKay, BP America’s chairman, about what happened.

Mr McKay was among oil industry executives called to Congressional hearings last week, but this is the first time Congress will have an opportunity to question a senior Obama administration official about the government’s handling of the crisis.

BP said on Monday it was managing to funnel the equivalent of 1,000 barrels a day of oil from the blown well to a tanker ship with the use of a mile-long tube.

That would amount to a fifth of the estimated daily spill of 5,000 barrels – an estimate made by the Coast Guard and BP, but increasingly challenged by other experts as being too small.

"This is just containing the flow, later this week, hopefully before the end of the week, we’ll make our next attempt to actually fully stop the flow," BP Chief Operating Officer Doug Suttles told NBC’s Today programme.

BP finally managed to insert the tube into the leaking pipe, using underwater robots, on Sunday at the third attempt.

But, in a joint statement, Ms Napolitano and Secretary of the Interior Ken Salazar said the latest technique was "not a solution to the problem and it is not yet clear how successful it may be".

It added: "We will not rest until BP permanently seals the well head, the spill is cleaned up, and the communities and natural resources of the Gulf Coast are restored and made whole."

BP also said on Monday it had received 15,000 claims for compensation, and had already paid out on 2,500 claims. It reinterated it would pay all "legitimate claims".

Over the weekend, Ms Napolitano and Mr Salazar had called for "immediate public clarification" from BP over its intentions about paying clean-up costs.

But experts warn that BP’s total liability for the spill could run into billions of dollars.

Scientists said on Sunday they had found vast underwater plumes of oil, one 10 miles (16km) long and a mile wide, lending weight to the fears of those who believe the actual spill could be many times greater than the estimate of 5,000 barrels daily.

Researchers from the National Institute for Undersea Science and Technology said they had detected the slicks lurking just beneath the surface of the sea and at depths of 4,000ft (1,200m).

Samantha Joye, a marine science professor at the University of Georgia, said: "It could take years, possibly decades, for the system to recover from an infusion of this quantity of oil and gas.

"We’ve never seen anything like this before. It’s impossible to fathom the impact."

Chemical dispersants BP has been dumping underwater may be preventing the oil from rising to the top of the ocean, the scientists said.

The find suggests the scale of the potential environmental disaster is much worse than previously feared since the rig blew up, killing 11 workers.

Some scientists cast doubt on BP’s estimate of the oil flow rate, saying the widely repeated figure of 5,000 barrels per day dramatically understates the real amount.

A week ago, BP tried to cap the well with a 100-tonne box but gave up after it became encrusted with ice crystals.

Mississippi has become the third US state to have traces of oil wash up on its coast, along with Louisiana and Alabama.

The spill is threatening to eclipse the 1989 Exxon Valdez leak off Alaska as America’s worst environmental disaster.