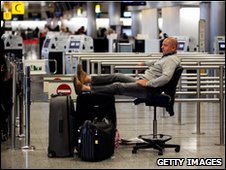 New rules to allow planes to fly at higher ash densities for a limited time will be introduced at noon on Tuesday, the Civil Aviation Authority has said.

To fly in the ash zone, airlines will need to get agreement from their aircraft and engine manufacturers.

The authority’s move has been welcomed by airlines, regulators and manufacturers.

It comes after heavy criticism of the current no-fly zone system by airline chiefs.

Thousands of passengers have been stranded by the latest raft of flight cancellations following airport closures across the UK.

All restrictions have now been lifted, after the volcanic ash cloud over UK airspace moved away, but knock-on disruption continues.

Airport operators are advising passengers to check for delays to their flights with airlines.

Air traffic control company Nats said it was "delighted" by the new measures, which meant there were "no predicted restrictions on UK airspace in the immediate future".

CAA chief executive Andrew Haines said "unprecedented situations" required "new measures" and the challenge posed by the volcano could not be underestimated.

"The world’s top scientists tell us that we must not simply assume the effects of this volcano will be the same as others elsewhere.

"Its proximity to the UK, the length of time it is continuously erupting and the weather patterns are all exceptional features.

"The answer can only come, therefore, from aircraft and engine manufacturers establishing what level of ash their products can safely tolerate," he said.

Jim French, chief executive of budget airline Flybe – the only airline so far to satisfy the CAA’s conditions – said he welcomed the move.

He said the airline had been forced to cancel 381 flights during the past 48 hours but if the new criteria had already been in place, it would have only affected 21 flights.

Transport Secretary Philip Hammond said the CAA, aircraft and engine manufacturers and airlines had been working "extremely hard" to "get people flying".

Airlines had been calling for the system – which uses Met Office data to set out no-fly zones – to be revised.

Earlier, British Airways chief executive Willie Walsh had said blanket bans on flying were "a gross over-reaction to a very minor risk" and called for a "much better and more sensible" approach.

The CAA had already raised the density threshold level that forces a flight ban once, following six days of airport closures in April.

Since the Eyjafjallajokull volcano erupted last month, throwing huge amounts of ash into the air, thousands of flights have been delayed or cancelled across Europe due to fears that ash could turn into molten glass within a hot jet engine, crippling the aircraft.

The latest UK disruption saw airspace over Northern Ireland close first on Saturday, before the cloud moved south and grounded flights in many parts of the UK on Sunday.

On Monday, thousands of passengers were left to rebook their flights or to wait in airports for new departure times.

Virgin Trains said 7,000 extra seats had been made available on Monday, mainly on routes between Birmingham and Glasgow and Edinburgh, and between London Euston and Glasgow.

Eurostar laid on six extra trains through the Channel Tunnel on Monday, amounting to about 5,500 additional seats.

In the Netherlands, Amsterdam’s Schiphol and Rotterdam airports reopened from 1300 local time (1200 BST) after being closed for seven hours.

Among the affected travellers who contacted the BBC News website was Matt Pope, from Guildford, who e-mailed to say it was the third time the ash had disrupted his travel plans. On the first occasion he was stuck in North Carolina for six days.

He wrote: "Last weekend the Easyjet flight from Prague to Gatwick was cancelled due to aircraft positioning problems after ash in central Europe.

"This was after we ran the marathon and I missed my flight to Singapore the next day causing expensive rescheduling.

"Now I am sat at Heathrow awaiting for a flight to NY. Will this ever end?" 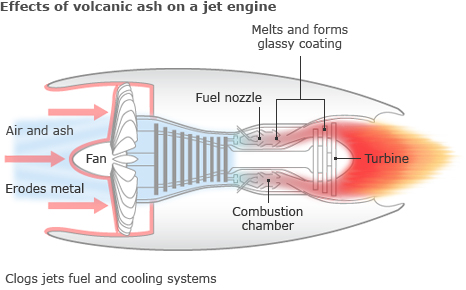 Are your travel plans likely to be affected by the latest disruptions? Will you make alternative travel plans? You can send us your comments Click here to add comments..