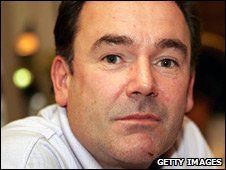 Backbench MP Jon Cruddas has ruled himself out of the Labour leadership race, saying he does not want the job – nor to be prime minister.

Mr Cruddas, who came third in the 2007 deputy leadership race, said the jobs required "qualities I do not possess".

But he said he wanted to help rebuild and energise the party.

Brothers David and Ed Miliband have officially declared they will both run to replace Gordon Brown and Ed Balls has not ruled himself out.

Former health secretary Andy Burnham is also thought to be taking soundings – and the veteran left wing MP John McDonnell has said he will run, if he can get the support of sufficient MPs.

The contest was triggered by Mr Brown’s resignation as Labour leader and prime minister last week, when the Conservatives and Liberal Democrats agreed to form a coalition government.

Mr Cruddas, an influential backbencher who turned down a job offer from Gordon Brown when he became prime minister in 2007, had been thought likely to stand for the leadership as a standard-bearer for the grassroots and the left of the party.

But the Dagenham MP said while "many people" had urged him to stand: "I do not feel that I am in a position to deliver on the hopes and expectations that will be placed in the next leader."

He said he had been "humbled" by the enthusiasm shown for his candidacy and had given it "serious thought". And he said he was "determined to play a full role in the reinvigoration" of the Labour Party.

But he added: "To put it simply, that role of rebuilding and energising the party is a job that doesn’t have a vacancy.

"I would like to be involved in the debate about the future direction of the party and how we reconnect with our lost voters.

"But I cannot enter a leadership election just to contribute to a debate, to go into this must be on the basis of running to win and hand on heart I do not want to be leader of the Labour Party or, subsequently, prime minister. These require certain qualities I do not possess."

BBC political correspondent Iain Watson said it was interesting that Mr Cruddas had not endorsed anyone else – as he would be a welcome supporter for the leadership rivals, because he was likely to bring with him endorsement from the trade unions.

Earlier, David Miliband officially launched his leadership campaign – warning against "re-fighting the battles of the past".

"The Blair-Brown era is over. New Labour is not new any more. New Labour did fantastic things for the country but what counts is next Labour," he said.

His brother Ed has said the party must renew itself and needed to be "clear and honest" about the scale of its election defeat.