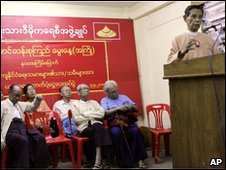 The pro-democracy party of Burmese opposition leader Aung San Suu Kyi is to disband when a registration deadline for elections expires at midnight.

The National League for Democracy (NLD) is boycotting the polls because it says the laws under which they will be held are unfair.

Burma’s military leaders say any existing party that fails to register must disband.

The NLD overwhelmingly won elections in 1990 but was never allowed to govern.

The forthcoming polls – for which no date has yet been set – will be Burma’s first in 20 years.

International observers have roundly criticised the newly enacted election laws – and critics say the military will use the election to strengthen its grip on power.

Senior NLD leader and co-founder Win Tin told the BBC that the mood at NLD headquarters in Rangoon was sad but defiant.

"It is a great moment for us, it is a great message to the military that our party is sound and has decided not to register because the laws are really untrue to us and oppressive and subjective," he said.

The election laws, announced in March, ban anyone with a criminal conviction from being a member of a political party.

That meant that the NLD would have to expel Ms Suu Kyi and other key leaders if it wanted to take part in the polls. The laws also nullified the NLD’s 1990 victory.

Several top military officials are also reported to have stepped down to run as civilian candidates, potentially further strengthening military numbers in the chamber.

The NLD was founded in 1988, in the wake of the 8/8/88 anti-government violence. Since the party’s 1990 election win, Ms Suu Kyi has spent much of her time in some form of detention.

The registration for new political parties begins on Friday and reports suggest that some ex-NLD members could regroup to form a new party that can contest the polls.